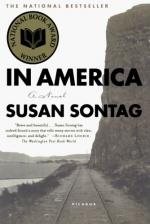 Jim Sheridan
This Study Guide consists of approximately 23 pages of chapter summaries, quotes, character analysis, themes, and more - everything you need to sharpen your knowledge of In America.

AIDS is a major problem in America and around the rest of the world. Although treatments have been found to slow down the progress of the disease and allow those who have HIV to lead fairly normal lives, there are still no cures. Although the film doesn't come out directly and talk about finding a cure, Mateo's death offers an implied commission.

When viewers first meet Mateo, we have no real clues that he has AIDS. He has medicine in his refrigerator that could be for any disease, and no one in the family seems to think much of it either. The first time we know there is a major problem is when the men try to stop Christy from giving Mateo CPR.

As the film progresses, the audience sees the slow rebirth of the family after Frankie's death and the slow death of Mateo from AIDS. The...

In America from BookRags. (c)2021 BookRags, Inc. All rights reserved.