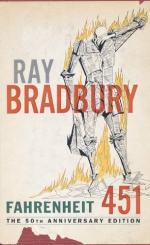 Get Montag in "Fahrenheit 451" from Amazon.com
View the Study Pack
View the Lesson Plans
Related Topics
A Medicine For Melancholy and Other Stories

Ray Bradbury
This student essay consists of approximately 2 pages of analysis of Montag in "Fahrenheit 451".

Summary: In the science-fiction classic "Fahrenheit 451" by Ray Bradbury, Montag learns to solve his problems to become a better person.
Losing his mind, job and family, Montag finds himself running away from everything he knows. In Fahrenheit 451 the main character goes through many tough situations throughout the story. His problems and issues can be related to simply. Montag changes his ways of living and thinking, and turns his life in a different direction. Montag does not feel he has much time for his job anymore.

Montag has a change in heart and thoughts toward his job and what it is about. He takes a book and feels some interest to read them and understand them. He really has quite an odd job in the future, he's not supposed to read books, he's supposed to burns them. "I heard once that along time ago houses used to burn by accident and they needed firefighters to stop the flames."(Bradbury-8) His job is the total opposite. Montag decides to quit his job: he sees a different side of society, the way it used to be. Like Montag, I do not have time to work at my job. He also creates trouble for himself by disobeying rules, so he just runs from his problems. Like when the station robot dog chases him he simply hid in his home. He doesn't ever seem to really solve them directly. Always I tend to wait and figure out what I am doing before attacking my problem.

In the end Montag figures out how to solve his problems. He first quit his job when he almost got caught with a book. He leaves the city to find some outsiders who support his cause and help him out off the mess he had gotten in. But his actions are somewhat different from how

I would have dealt with them. Montag burns his home in the story. I would probably never go as far as he did to solve a problem, although my problem might not have been as bad as the situation he was in. By the end of the novel, Montag changed his ways, became a better person and learned something, as I often do.