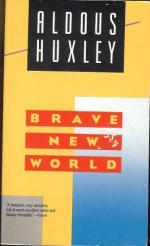 Get Brave New World and Blade Runner, a Comparison from Amazon.com
View the Study Pack
View the Lesson Plans

Aldous Huxley
This student essay consists of approximately 3 pages of analysis of Brave New World and Blade Runner, a Comparison.

"I want god, I want poetry, I want real danger, I want goodness, I want sin."

"In fact," said Mustapha Mond, "You're claiming the right to be unhappy."

"Alright then," replied the savage, "I'm claiming the right to be unhappy!"

These quotes are an extract from Brave New World, which reflects the irony of both of these texts that is in the search for progress; that the important aspects of humanity are lost. Both of these texts explore through methods such as satire and irony a dystopic view of the world due to advancements in science technology.

The human relationships, is the understanding of the wild, which are shaped and reflected in this text through their composers' by the use of...