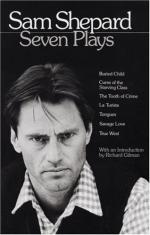 Summary: Sound effects help to heighten the setting and mood of the play "True West." In a play, sound effects usually have to be set off at just the right time. The well-talented sound technicians on "True West" made the characters appear to become more and more disturbed every time they heard the sounds, making the play seem more real to the audience.

Throughout the entire film/ play "True West"; the sound effects were done extremely well. There was a well talented sound team on the film. They took their time in making the play seem real to the audience when it was preformed. There were two main sound effects, which included the crickets and coyotes. The sound team made these sounds seem real and effective. It fell in well with the play and made the characters seem to become more and more disturbed every time they heard the sounds. The sound effects made it seem like you were in the house with them.

Sound is extremely important when it comes to anything that is being preformed. The sound can either make the play seem more exciting or destroy it by being the wrong thing. Sound is the base to a good movie from sound effects to movies. The sound sets the mood and usually emphasizes it as well. A movie directed by Stephen King would be terrible with sound from a Walt Disney soundtrack. Sound just makes everything better.

The sounds in "True West" bring the play to life. It would just be another play, nothing special to it, but the sounds make the viewer believe. The crickets drive Lee mad and become very annoying to him. Every time the plot thickened the coyotes would howl louder and louder until the conflict would be solved. At the end the problem wasn't solved and the coyotes were extremely loud and you could just feel the tension between the two brothers.

Sound effects are a tricky thing to master in plays or movies. In a play they have to be set off at just the right time or else the play will be thrown off and look terrible. In

"True West" the sound effects are perfect and their timing is perfect so the play is perfect. The sound team did a really good job on this play.