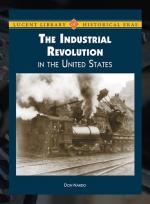 Get Successful Businessmen During the Industrial Revolution from Amazon.com
View the Study Pack

This student essay consists of approximately 2 pages of analysis of Successful Businessmen During the Industrial Revolution.

Successful Businessmen During the Industrial Revolution

Summary: Reasons why some businessmen became duccessful during the Industrial Revolution.
One explanation for businessmen's success during the industrial revolution was the new opportunities for wealth introduced through peoples changing interests. For example, rather than drink alcohol, people began drinking tea and coffee. They began to want beautifully designed tea pots and cups, and wanted better quality goods.

A good example of this would be Josiah Wedgwood exploiting people's newly discovered interest in tea and coffee by building tea pots from good china. Other examples are the Darby's making cheap cast iron pots and improving the quality of iron and Richard Arkwright producing the water wheel powered spinning frame to make cheap, high quality cloth.

Another explanation for businessmen's success is that they began to experiment with there factories. In many cases these experiments turned out to be a success and in some they helped improve conditions at work. Some of these ideas revolutionized the world and drastically changed the way businesses work today. Thanks to the growing trade unions at the time, we now expect to have these benefits at our jobs, and often don't realize that people did not use to have benefits such as days of and lunch hours.

The evidence for this is Robert Owen improving standards of working conditions. He made sure his factories were safe and sometimes gave his workers homes and education. This was a successful experiment because, as he predicted, when his workers were happy they worked better.

A final explanation is that people began to import and export goods more often. This made businessmen who were once only successful in Britain, the chance to be successful all through Europe, making them incredibly rich.

This explanation could be based on Josiah Wedgwood making catalogues and translating them into many different languages. This helped him sell his goods across Europe. An example of this was him sending out a special order of a 950 piece dinner service for the Empress Catherine of Russia, which also helped him gain for fame and popularity.

Of the various reasons I think that the most important are the beneficial experiments in factories. I think that without these experiments, most of the businessmen mentioned would not be successful.

More summaries and resources for teaching or studying Industrial Revolution.