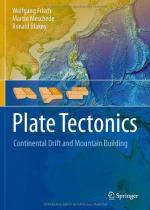 Get The Theory of Plate Tectonics from Amazon.com
View the Study Pack

This student essay consists of approximately 2 pages of analysis of The Theory of Plate Tectonics.

The Theory of Plate Tectonics

Summary: Describes the theory of plate tectonics and how the theory has changed the way geologists think about the Earth. Details major plates and how the theory helps predicts earthquakes.
Plate tectonics, or plate movements, have changed the way geologists think about the Earth. Long ago, people thought that the Earth never changed. Those people thought that it was exactly like it has always been. Overtime, scientists realized that fossils were found in places where they should not be. That made them begin to wonder. In the rocks at the top of the Himalaya Mountains, scientists found many fossils. Sand and gravel in long rows showed that the middle of the Sahara Desert was once covered in a glacier. In Antarctica, fossils of trees, ferns, and plant-eating dinosaurs were found. Antarctica was most likely near the equator millions of years ago. After a long time, it might've broken apart from Pangaea and moved south. This also explains the evidence of glaciers in the Sahara Desert.

The Earth's surface is broken into many different sections, called plates. When the plates force a high amount of pressure on each other, its causes earthquakes, volcanoes to erupt, and the formation of mountains. The area where two plates meet is called plate boundaries. Plate tectonics is a combination of two ideas, sea-floor spreading and continental drift. The creation of new oceanic crust at mid-ocean ridges is called sea-floor spreading. In 1969, spreading plate margins became part of the theory of plate tectonics. This theory explains not only about how ancient crust is destroyed along destructive plate margins, but it also explains how new ocean floor is created. Sea-floor spreading is also the movement of crust away from the mid-ocean ridges.

When continents over Earth's surface change position, it is called continental drift. One plate is destroyed when continental and oceanic plates collide. Convection currents will "carry" the oceanic plate back to the mantle, after going under the continental plate. When the oceanic plate slides against the underside of the continental plate, it causes earthquakes. There are nine major plates. The major plates included the Pacific Plate, the South American Plate, and the Eurasian Plate. The United States and Alaska are located on the North American Plate, but Hawaii is on the Pacific Plate. We have solved many of the Earth's mysteries by understanding plate tectonics. When the continents and oceans move about the surface, it is similar to passengers on a raft. Plate tectonics have helped to make sense of Earth's movement. This theory has helped scientists to predict many large Earthquakes.

More summaries and resources for teaching or studying Plate tectonics.

The Theory of Plate Tectonics from BookRags. (c)2022 BookRags, Inc. All rights reserved.