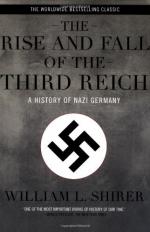 Get German Children Under the Nazi Regime from Amazon.com
View the Study Pack

This student essay consists of approximately 4 pages of analysis of German Children Under the Nazi Regime.

German Children Under the Nazi Regime

Summary: How much did German children know about Nazi ideology? How did they feel about it? This investigation presents the main elements of Nazi education, and the attitudes of the children living under the regime.
1. The main features of Nazi education:

§ Its purpose was to create the future generation, who are true believers and blindly loyal followers of Hitler by the time they reached adulthood.

§ All teachers were trained what to teach - the Nazi curriculum - and they had to be vetted by local Nazi party officials. Any teacher who considered to be disloyal, could have been dismissed. They had to be a member of the Nazi Teachers' Association, and be very careful in teaching only Nazi ideology to the students. If a teacher was suspected to educate something which was not in the curriculum, could have been informed to the party, since children were stimulated to do so.

§ All subjects were taught to convey Nazi ideology, must concentrate on military matters and the nationalistic approach in all of them was compulsory. History was about only the glorification of German leaders and...

More summaries and resources for teaching or studying Nazi Germany.