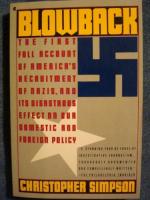 Get Causes of the End of the Cold War from Amazon.com
View the Study Pack

This student essay consists of approximately 5 pages of analysis of Causes of the End of the Cold War.

Causes of the End of the Cold War

Summary: Which did more to bring about the end of the Cold War, the actions and decisions of individual statesmen, or long-term impersonal factors? While the actions of Ronald Reagan and Mikhail Gorbachev played important roles in this process, impersonal factors such as the inherent inefficiencies of the Soviet system and the continued Western policy of containment had a greater impact in ending the Cold War.
The Cold War refers to a period of prolonged tension and rivalry between two differing political and economic systems, in particular, the United States of America (USA) and the Soviet Union. This period was characterised in particular by superpower control of two opposing military and political blocs. The Cold War can be said to have formally ended with the reunification of Germany in 1990.

The end of the Cold War was brought about by a number of reasons. Individual statesmen is a factor in which Gorbachev's revamp of the economic and political policies as well as Reagan's aggressive military spending tactics play a big role, while long-term impersonal factors include the inherent inefficiency of the Soviet system and the long-term policy of containment carried out by the West.

In analyzing the impact of individual statesmen, we must realize that two particular individuals who played rather different roles were instrumental...

More summaries and resources for teaching or studying Cold War.

Causes of the End of the Cold War from BookRags. (c)2021 BookRags, Inc. All rights reserved.