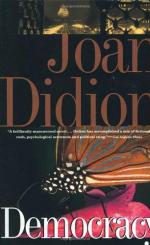 Get Influences on American Democracy from Amazon.com
View the Study Pack
Related Topics
Blue Nights
South and West: From a Notebook
Let Me Tell You What I Mean

Joan Didion
This student essay consists of approximately 4 pages of analysis of Influences on American Democracy.

Summary: American democracy and government is a collaboration of both new liberal concpets and older ideas molded together to suit modern needs. A study of the American democratic system reveals the influence of the ancient Greeks, the Roman Republic, and the English, as well as the experiences of the American colonists.
Steven Edwards Padilla

America is a country whose emergence is contributed to many sources. More specifically, the American form of Democracy (Greek word for "rule by the people", Democracies are generally characterized by citizen votes and assemblies) holds its roots in the governments of multiple predecessors. From English colonial rule to the governments of Greece and Rome, The United States owes it's birth as a country to many areas of influence.

The Ancient Greeks belonged to a very prosperous and enlightened society. It was the Greeks who are credited with the first major government to put the power of a nation in the hands of the average citizen. Voting, political assembly, and official citizenship are all concepts that can be traced back to Classical Grecian ideas. These concepts were adopted by the Founders of America because of their opposition to tyranny and exploitation of...

More summaries and resources for teaching or studying Democracy.