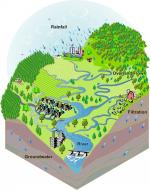 Get Ecosystem Lab from Amazon.com
View the Study Pack

This student essay consists of approximately 2 pages of analysis of Ecosystem Lab.

Procedure: The first thing we did was collect our materials and begin to cut the bottle, we cut about the top third off. After removing the top we placed the gravel in then the soil, red worm, grass and moss, cricket, and mealworms. We then proceeded to take both the temperature and pH level in the bottle before sealing it. The bottle was then sealed and put on the windowsill from 9/25 through 10/4 for observation and documentation. Once we had our observations, data, and conclusion and we took our final measurements we then disposed of the bottle and its contents.

Conclusion: In the ecosystem we created we began with a cricket, red worm and two mealworms we were left with dead bodies and moldy food. As you can see we did not create a self-sustaining ecosystem. The reasons for this is that we put the bottle in intense sunlight for to long, did not include enough water/food and we did not plant the plants deep enough to complete their tasks. Unfortunately this experiment disproved our hypothesis and denied us the chance to witness an ecosystem grow and evolve. On the plus side I believe we learned much for through failure then we would have if we had succeeded because this showed not only what was wrong about how we created the ecosystem but why it was wrong. In addition through our mistakes we were able to create limiting and necessary factors to create a correct ecosystem.

More summaries and resources for teaching or studying Ecosystem.