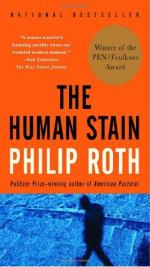 Philip Roth
This literature criticism consists of approximately 4 pages of analysis & critique of The Human Stain.

In the following mixed assessment, Hynes asserts that Roth displays passion and an eloquent search for meaning in The Human Stain.

The hot engine powering all of Philip Roth's novels is rage. Years ago it was a young man's rage at small-minded, bourgeois provincialism, but over the years, as Roth has become more intellectually ambitious, that rage has broadened its scope into something like a general critique of American culture. Indeed, his most recent books, American Pastoral and I Married a Communist, constitute a sort of fictional history of American radical politics since World War II.

The Human Stain, his newest novel, seems to start out as something less substantial—a satire of the hothouse politics of academia, where the culture wars smolder and vent gases like a decades-old coal mine fire—but without warning the novel...

Critical Review by James Hynes from Gale. ©2005-2006 Thomson Gale, a part of the Thomson Corporation. All rights reserved.