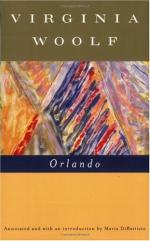 Get Critical Essay by Susan M. Squier from Amazon.com
View the Study Pack
View the Lesson Plans
Related Topics
Jacob's Room: Novel
The Voyage Out: A Novel
The Years
Night and Day: A Novel

Virginia Woolf
This literature criticism consists of approximately 12 pages of analysis & critique of Orlando: A Biography.

In the following excerpt, Squier analyzes Orlando as Woolf's challenge to the tradition of realistic novels initiated by Daniel Defoe.

On March 14, 1927 Virginia Woolf recorded in her diary the symptoms of an "extremely mysterious process … the conception last night between 12 & one of a new book."

I sketched the possibilities which an unattractive woman, penniless, alone, might yet bring into being… It struck me, vaguely, that I might write a Defoe narrative for fun. Suddenly between twelve & one I conceived a whole fantasy to be called "The Jessamy Brides"—why, I wonder?… No attempt is to be made to realise the character. Sapphism is to be suggested. Satire is to be the main note—satire & wildness.

That Woolf's sixth novel represents an act of comic tribute to...

Critical Essay by Susan M. Squier from Gale. ©2005-2006 Thomson Gale, a part of the Thomson Corporation. All rights reserved.