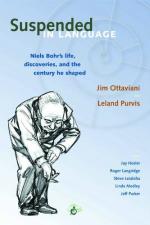 This Biography consists of approximately 6 pages of information about the life of Niels Henrik David Bohr.

The Danish physicist Niels Henrik David Bohr (1885-1962) formulated the first successful explanation of some major lines of the hydrogen spectrum. The Bohr theory of the atom has become the foundation of modern atomic physics.

Niels Bohr was born on Oct. 7, 1885, in Copenhagen, the son of Christian Bohr and Ellen Adler Bohr. He studied physics and philosophy at the University of Copenhagen. His postgraduate work culminated in 1911 in a doctoral dissertation on the electron theory of metals.

In the same year he went to Cambridge University and worked with J. J. Thompson at the Cavendish Laboratory. By the spring of 1912 he was working with Ernest Rutherford at the University of Manchester. It was there that Bohr made some valuable suggestions about the chemical relevance of radioactive decay which proved to be most instrumental in formulating the concept of isotopes.

Secret of the Atom