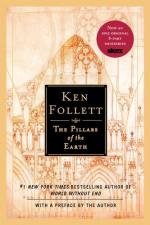 Get Ken Follet from Amazon.com
View the Study Pack
Related Topics
The Evening and the Morning

This Biography consists of approximately 14 pages of information about the life of Ken Follet.

Authors and Artists for Young Adults on Ken Follet

Ken Follett was born in Wales, "in a little terrace house in Cardiff in 1949. It was very much a petit-bourgeois background. My dad was a clerk in the Inland Revenue [English equivalent of the IRS], and I went to state schools.

"At that time I wanted to be a captain of industry, then later I thought I'd be a great reporter."1

Even so, Follett was fascinated with thrillers and spy novels from an early age. Before reaching adolescence, he had devoured all of H. G. Wells' science-fiction work and Ian Fleming's entire James Bond oeuvre.

In 1967, while a student at the University of London, the eighteen-year-old Follett married twenty-one-year-old Mary Emma Ruth Elson. Their son Emanuele was born later that year. While her husband continued his schooling and watched after their son, Mary Follett supported the family by working as a bookkeeper.

More summaries and resources for teaching or studying Ken Follet.

Ken Follet from Gale. ©2005-2006 Thomson Gale, a part of the Thomson Corporation. All rights reserved.