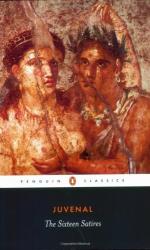 Get Juvenal from Amazon.com
View the Study Pack
View the Lesson Plans

Juvenal
This Biography consists of approximately 6 pages of information about the life of Juvenal.

Encyclopedia of World Biography on Juvenal

Juvenal (died c. 127), or Decimus Junius Juvenalis, was the greatest of the Roman satirists. His bitter and rhetorical denunciations of Roman society, presented in a series of vivid pictures of Roman life, inspired all later satirists.

The life of Juvenal coincided with one of the most eventful periods of Roman history, one in which the weaknesses and failures of the government and the corruption and decadence of society were especially grave and evident. In reaction to this, Juvenal molded a new kind of satire, and he was able to impose it by his example on posterity.

Juvenal was apparently almost completely unread between his own lifetime and the 4th century, when an attempt seems to have been made to compile his biography. This work, of which we have traces in over a dozen medieval biographies, seems to have been derived mainly from (occasionally misunderstood) passages...

More summaries and resources for teaching or studying Juvenal.

Juvenal from Gale. ©2005-2006 Thomson Gale, a part of the Thomson Corporation. All rights reserved.