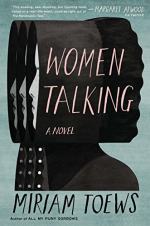 Get Women Talking from Amazon.com

Everything you need to understand or teach Women Talking by Miriam Toews.

In her arresting new novel, Women Talking, Miriam Toews tells the story of eight women struggle to find life after violence. Told from August Epp's first person point of view, the novel unfolds as a series of recordings from the women's two day meeting. After the women discover eight men in their community have been drugging and raping them repeatedly, they arrange their secret dialogues as a means of orchestrating the best response to the men's astounding abuses. While arguing the Biblical, philosophical, and moral implications of their entrapment, the women realize they must either do nothing, stay and fight, or leave. Through August's narrative recordings, the author explores the limitations of interpretation and translation, the individual's right to her own voice, and the ways in which the individual might find purpose after profound persecution.