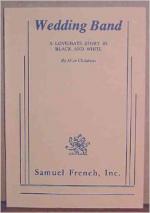 Get Wedding Band from Amazon.com

Everything you need to understand or teach Wedding Band by Alice Childress.

Although Alice Childress wrote Wedding Band (the full title of which is Wedding Band: A Love/Hate Story in Black and White) in the early 1960s, the play was not performed professionally until 1966. There was interest in producing the play on Broadway, but because of its controversial subject matter the play remained largely unknown to audiences. Finally in 1972 Wedding Band was produced in New York for the first time. Subsequently, a New York...