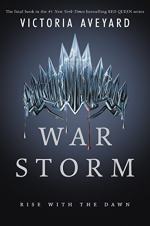 Get War Storm from Amazon.com

Everything you need to understand or teach War Storm by Victoria Aveyard.

After Mare’s love Cal chooses the crown over her, the two are caught in a tenuous alliance between the powerless Reds and the godlike Silvers. In hopes of showing Cal a world without kings, Mare goes to Montfort where she must band together with the Montfort soldiers, the Scarlet Guard, and Cal himself to defeat his crazed brother Maven as he tries to return to the throne. War Storm focuses on themes of freedom, politics, and personal sacrifice.