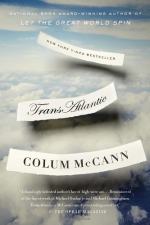 Get TransAtlantic from Amazon.com

Everything you need to understand or teach TransAtlantic by Colum McCann .

Transatlantic is the story of four generations of women who lived their lives fully and, sometimes, unconventionally. The novel follows the lives of Lily who met Fredrick Douglass and was moved to leave Ireland in favor of the United States; Lily's daughter, Emily who wrote a thank-you to an Irish woman who was kind to Lily; Emily's daughter, Lottie, who arranged to have the letter flown across the Atlantic on the first transatlantic flight; and Lottie's daughter, Hannah, who finally opened Emily's letter.