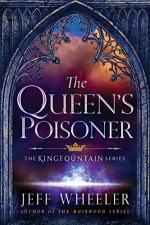 Get The Queen's Poisoner from Amazon.com

Everything you need to understand or teach The Queen's Poisoner by Jeff Wheeler.

The Queen's Poisoner, by Jeff Wheeler, is the story of Owen Kiskaddon, a young boy who becomes a pawn in the political arena of his world. Owen is held prisoner by King Severn, the ruler of Ceredigion, the kingdom where Owen's family lives. Owen's life hangs in the balance until Ankarette, a woman who serves as the queen's poisoner, helps Owen convince King Severn that Owen is Fountain-blessed. In the kingdom, The Fountain is the symbol of power and mysticism. It is the source of the supernatural power of those people who are Fountain-blessed. At the time, Owen thinks Ankarette is using the premise of a special power as a ploy. However, Owen later realizes that he is, indeed, Fountain-blessed. The novel explores Ankarette's role in the novel, the importance of The Fountain, and the politics of the kingdom.