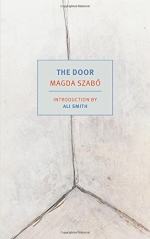 Get The Door from Amazon.com

Everything you need to understand or teach The Door by Magda Szabo.

Mysterious Emerence Szeredás carefully protected her privacy and her secrets in The Door, a novel by Magda Szabó. Emerence had been hurt so often that she learned to trust few people. She never bowed to politics, and she hated organized religion. Despite Emerence's unusual outlook on life, she dedicated herself to her work by taking food and comfort to community members who were sick or dying. She agreed to help out the narrator of the novel as a housekeeper. Though the narrator was younger than Emerence, the two women slowly developed a friendship built on mutual trust. Ironically, the narrator believes that she caused Emerence’s death. She has written this novel to confess her mistakes.

The The Door Study Pack contains: