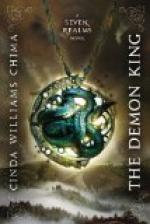 Get The Demon King from Amazon.com

Everything you need to understand or teach The Demon King by Cinda Williams Chima.

Hanalea is considered the savior of her people, and a saint to all who know the story of the Breaking. It is a time of great chaos between the clans, the royal family, and the wizards which escalates to such a degree that the world is almost lost in the process. As a result of a wizard named Waterlow, who is also known as the Demon King, the world very nearly...