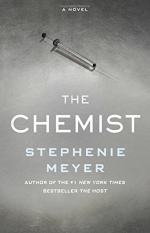 Get The Chemist from Amazon.com

Everything you need to understand or teach The Chemist by Stephenie Meyer.

The Chemist is a mystery novel by Stephenie Meyer in which Alex, a molecular biologist whose real name is Dr. Juliana Fortis, is trying to get to the bottom of a biological plot. In her efforts, Alex uses chemical agents for torturing during her interrogations. Her actions make her the target of assassination attempts by her former government department. As she struggles to survive, Alex proves that women are capable of completing tasks traditionally fulfilled by men. The Chemist deals with important themes, such as defeating the enemy on their level without sacrificing personal morals.

The The Chemist Study Pack contains: