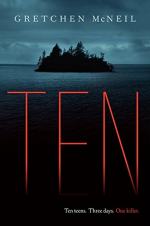 Get Ten from Amazon.com

Everything you need to understand or teach Ten by Gretchen McNeil.

Best friends Meg and Minnie are invited to Henry Island for a top-secret Presidents' Day weekend party. Eight other teens, including the football star they are both crushing on, T.J., will be there, too. On the first night, the group finds a video to watch which soon turns sinister with a message that warns them all: "Vengeance is mine." On that same night, a girl in the group is found hanging from the rafters. Shortly after, another girl in the group is killed. What should have been a fun weekend of booze and partying has become a struggle for survival. One by one, others are killed. To make things worse, a storm cuts off all connections from the outside world. As Meg finds herself spending more and more time with T.J., Minnie's jealousy grows. Alliances are made, bonds are broken, and soon it is only Meg, Minnie, and T.J. left alive in the house. Meg does not know who to trust. Will she trust the boy she loves, or the friend who has been by her side since junior high? Is she brave enough to follow her instincts, or will she fall prey to the secret island killer, like everyone else?