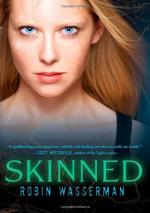 Get Skinned from Amazon.com

Everything you need to understand or teach Skinned by Robin Wasserman.

"Skinned" is a science fiction novel by acclaimed Young Adult writer Robin Wasserman. The novel is set in the future and follows 17-year-old Lia Kahn as she attempts to adjust to her new life after her brain is downloaded into an artificial body following a car crash. Published in 2008, Skinned is the first novel in the "Skinned" trilogy, continued in "Crashed" (2009), and concluded in "Wired" (2010).

When Lia Kahn is severely injured...