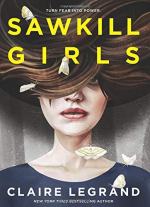 Get Sawkill Girls from Amazon.com

Everything you need to understand or teach Sawkill Girls by Claire Legrand.

Sawkill Girls by Claire Legrand is a low fantasy, young adult novel set on Sawkill Rock, an island off the coast of Massachusetts, in the modern day. The novel is narrated by a third-person narrator, mostly limited to the perspectives of teens Marion Althouse, Zoey Harlow, and Val Mortimer. The Rock gifted the girls supernatural powers to banish the Collector, a demon who ate island girls for generations. As the Collector's host and hunter, Val overcame her ancestral duty to join Marion and Zoey and successfully rewrite their destinies. Sawkill Girls deals with themes of friendship, love, good versus evil, fear, and interconnectedness.