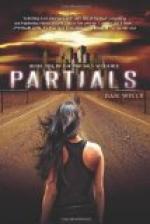 Get Partials from Amazon.com

Everything you need to understand or teach Partials by Dan Wells.

In "Partials", Kira Walker is a sixteen-year-old medic as the story opens. She lives in a world in which there are only a few thousand humans left following a revolution in which a genetically-altered race of people left many humans dead and a plague killed millions more. In Kira's world, human babies are not able to survive more than a few hours before the plague kills them. The immunity the few...