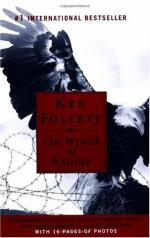 Get On Wings of Eagles from Amazon.com

Everything you need to understand or teach On Wings of Eagles by Ken Follett.

On Wings of Eagles Summary

Follett's On Wings of Eagles stands as a tribute to traditional American values and patriotism. Two major characters, Ross Perot and Arthur Simons, are portrayed as intensely loyal to their families, friends, and country.

Perot, Texas industrialist and founder of Electronic Data Systems Corporation, is not characterized as the typical "greedy, power mad millionaire," but as an exemplary father, loyal to his wife and children, and gravely concerned about his dying mother. Follett reminds readers that if she dies, Perot will "miss her very badly indeed."

Perot also feels personally responsible for his employees and fondly refers to them as "his men." When two of his top executives are imprisoned in Iran, he does not abandon them to their fate as the U.S. State Department would have him do. He adopts, instead, a positive attitude toward their situation.

He indicates that he got them into this predicament...

The On Wings of Eagles Study Pack contains:

On Wings of Eagles Short Guide

Ken Follet
4,061 words, approx. 14 pages
Ken Follett was born in Wales, "in a little terrace house in Cardiff in 1949. It was very much a petit-bourgeois background. My dad was a clerk in the Inland Revenue [English equivalent of the IRS], a... Read more

Ken Follett
3,382 words, approx. 12 pages
Ken Follett, author of best-selling thrillers such as Eye of the Needle, Triple, The Key to Rebecca, The Man from St. Petersburg, The Third Twin, The Hammer of Eden, Code to Zero, and the 2001 title, ... Read more

Ken(neth) (Martin) Follett
5,477 words, approx. 19 pages
Ken Follett began his career as a fiction writer while working for the London Evening News. He produced a series of mysteries and thrillers (two for children) under various pseudonyms until he felt he... Read more
Download the Study Pack