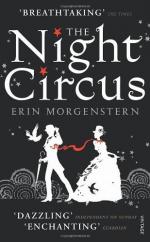 Get The Night Circus from Amazon.com

Everything you need to understand or teach Night Circus by Erin Morgenstern.

In 1873, Celia Bowen is left to her father’s care after her mother commits suicide. When Prospero realizes that his daughter has magical ability, he contacts his previous instructor, Mr. A. H., and he proposes a competition. Mr. A. H. agrees and Celia is bound to compete with a young orphan boy named Marco that Mr. A. H. raises and trains in magic.

When the two grow up, Mr. A. H. arranges for Marco to work for a man named Chandresh Lefevre and to influence the man to create a circus. On the night the circus opens, twins are born and are nicknamed Widget and Poppet. The circus becomes the playing field for Celia and Marco, who do not realize that their competition must result in the death of one of them.

Celia works as an illusionist in the circus. Marco creates a bonfire that ties him to the circus when he cannot travel with it and also provides protection for the performers. In addition, he arranges for his girlfriend, Isobel, to work at the circus and spy on Celia. Marco realizes that Celia is his opponent, long before Celia learns that Marco is her opponent.

Over the years Celia and Marco fall in love. When Isobel learns that Marco doesn’t love her, she removes the spell she put on the circus and things begin to fall apart and people begin to die.

The narration of the story weaves in and out of time. At the age of ten in 1897 a young man named Bailey is introduced to the circus and Poppet and begins a life-long passion with the circus.