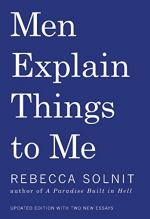 Get Men Explain Things To Me from Amazon.com

Everything you need to understand or teach Men Explain Things To Me by Rebecca Solnit.

Men Explain Things To Me Overview

As a writer and feminist who has been inspired by celebrated writers and women’s activists like Virginia Woolf, Susan Sontag and Betty Friedan, author Rebecca Solnit has provided background on long-held societal beliefs that men are superior to women. The “rape culture” has almost normalized the abuse of women in some cultures. While legislation has improved the persecution of rapists and other sex offenders in the U.S., women are often harassed and threatened when they speak out against their perpetrators. The anger and the availability of guns has often turned to violence against women. While great advancements have been made in the furtherance of women’s rights, there is still progress to be made.

The Men Explain Things To Me Study Pack contains:

You might also be interested in:
Hope in the Dark: Untold Histories, Wild Possibilities
The Mother of All Questions
Recollections of My Nonexistence: A Memoir
A Paradise Built in Hell