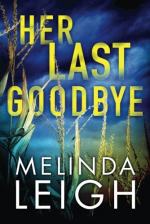 Get Her Last Goodbye from Amazon.com

Everything you need to understand or teach Her Last Goodbye.

In Her Last Goodbye by Melinda Leigh, private investigators Morgan Dane and Lance Kruger follow their instincts instead of siding with the police when Tim Clark comes to them for help in finding his missing wife, Chelsea. As Morgan and Lance interview suspects, the police find the body of another young woman who had been kidnapped eight months prior. When another woman goes missing, it appears there might be a serial rapist on the loose. Themes in the novel include the collaboration between police and the private sector, the psychology of torture, the strength of women, and self-mutilation.