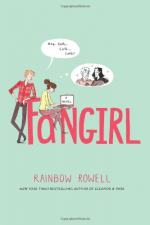 Get Fangirl from Amazon.com

Everything you need to understand or teach Fangirl by Rainbow Rowell.

An insecure college freshman learns she can overcome the hurts of her past in the novel Fangirl by Rainbow Rowell. Since she was only eight, Cather Avery has dealt with life by disappearing into writing fanfiction about her favorite young adult book series. Now that she’s in college, life has become too real for Cath. Her twin sister is asking for space, the mother who abandoned Cath wants to renew their relationship and the end of the Simon Snow series is coming, all bringing their own kinds of stress to a girl who can’t get over her own insecurity to even go eat at the college dining hall. Additionally, Cath feels as if she has to single handedly watch over her mentally ill father and alcohol addicted sister. With the help of some friends, Cath manages to come to terms with her mother, accept the love of a new boyfriend, rebuild the relationship with her twin sister and finish her version of the Simon Snow conclusion all before the end of her spring semester.