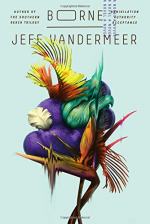 Get Borne from Amazon.com

Everything you need to understand or teach Borne by Jeff VanderMeer.

In Jeff Vandermeer's dystopian science fiction novel Borne, the reader is given the first person perspective of Rachel, a young woman who lives in a post-apocalyptic city terrorized by a giant flying bear named Mord. While out scavenging one day, Rachel finds a strange vase-like object tangled in Mord's fur. She takes it home and names it Borne. As Borne grows and learns to talk, Rachel and her partner Wick are forced to confront the reality that he could be dangerous; meanwhile, Borne struggles to adjust to the world around him. The novel concerns themes related to parenting, technology, and uncertainty, among others.

You might also be interested in:
Annihilation
Authority: A Novel
Acceptance
The Strange Bird: A Borne Story
Dead Astronauts