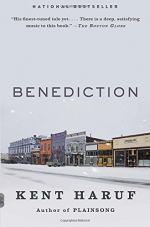 Get Benediction from Amazon.com

Everything you need to understand or teach Benediction by Kent Haruf.

Benediction, a contemporary novel by Kent Haruf, is set in the small community of Holt, Colorado. When one of Holt's residents, seventy-seven year-old Dad Lewis, receives a diagnosis of pancreatic cancer, his pending death becomes a hub for the exploration of other characters' lives. Benediction addresses issues such as the difficulty of extending forgiveness, the need to respect the dead and the dying, and the resistance for involuntary change.

You might also be interested in:
Plainsong
The Tie That Binds: A Novel
Where You Once Belonged: A Novel
Our Souls at Night
Eventide