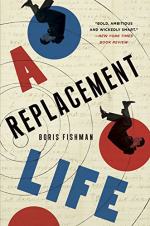 Get A Replacement Life from Amazon.com

Everything you need to understand or teach A Replacement Life by Boris Fishman.

The grey area that exists between right and wrong and truth and lies is the major theme of the novel “A Replacement Life” by Boris Fishman. Slava Gelman, a young immigrant from Soviet Russia, struggled with his desire to fit into mainstream America and write for a prestigious magazine while his family pressured him to remain true to their Russian roots. It was not until Slava’s grandmother died that he realized by turning his back on his family he had missed out on learning about the experiences of his elderly relatives. Other themes include the lifestyle of the Russian immigrants, money and writing as well as the reconciliation of a feud that separated the Gelmans from family friends for nearly two decades.