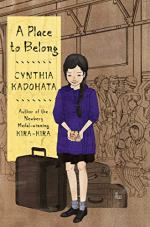 Get A Place to Belong from Amazon.com

Everything you need to understand or teach A Place to Belong by Cynthia Kadohata.

A Place to Belong Overview

Cynthia Kadohata's A Place to Belong is the story of Hanako, a young girl born in America to Japanese parents just before the beginning of World War II. After the Japanese bombed Pearl Harbor, Hanako's family are among the Japanese imprisoned in America. When the war comes to an end, the family return to Japan, hoping their lives will be better if they live with Hanako's paternal grandparents. Life in Japan is even more difficult with hunger as a constant threat and no hope for poor families to improve their situations. Hanako's father decides to send Hanako and her younger brother back to America to live with relatives. Though Hanako is initially reluctant, she realizes that her father has made the decision he believes is best for them. Written for the middle-school audience, the main themes are belonging, understanding the Japanese culture, and hope.

The A Place to Belong Study Pack contains:

A Place to Belong Study Guide

You might also be interested in:
Cynthia Kadohata
Kira-Kira
The Thing About Luck
Cracker!: The Best Dog in Vietnam
Saucy