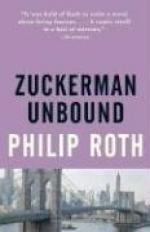 Philip Roth
This Study Guide consists of approximately 34 pages of chapter summaries, quotes, character analysis, themes, and more - everything you need to sharpen your knowledge of Zuckerman Unbound.

The following version of this book was used to create this study guide: Roth, Philip. Zuckerman Unbound. Vintage International, 1995.

Zuckerman Unbound takes place in 1969. It is written in the past tense and uses a limited third-person narrator. The novel opens in New York City, where newly-famous novelist Nathan Zuckerman finds that fame is rather terrible to face in daily life. People recognize him as the author of the successful new novel “Carnovsky,” and he finds that he no longer has much privacy in public places. One day, he eats in a deli, where he is approached by a man named Alvin Pepler. Like Zuckerman, Pepler is a Jewish man who was born and raised in Newark, New Jersey. Pepler says that he loves Zuckerman’s work. Pepler is a former marine who gained brief notoriety as a contestant on a quiz show called “Smart Money.” Pepler tells Zuckerman that he was forced off of the show by the producers, who coerced him into losing on purpose. Zuckerman leaves the deli, but Pepler continues to follow him, talking about the supposedly influential connections he has in New York City. Zuckerman, unnerved by the eccentric man, eventually manages to slip away from him.

In his apartment that evening, he receives an anonymous phone call from a man who threatens to kidnap Zuckerman’s mother if Zuckerman does not pay a large amount of ransom money. Zuckerman hangs up. He is unnerved but does not believe that the threat is sincere. Zuckerman thinks about his mother, whose neighbors apparently believe that the characters in “Carnovsky” are based on himself and his friends and family, although Zuckerman rejects this idea. Zuckerman then thinks about the night he met famous actress Caesara O’Shea. They met at a party in New York City earlier that year. They left the party and went to a restaurant called Elaine’s, where they commiserated over the tribulations of fame. They then returned to Caesara’s apartment, where they had sex. Zukerman had tried to call her the next day, but he was unable to reach her. He later found out that she had gone to Cuba to resume a romantic relationship with Fidel Castro.

The narrative then transitions back to Zuckerman’s present day. He receives another phone call from the anonymous caller, who reiterates his threat of kidnapping Zuckerman’s mother if Zuckerman does not pay ransom. Zuckerman hangs up, a little more shaken. Zuckerman calls his literary agent, André Schevitz, who tells Zuckerman not to worry about the caller, and to call the police if he is worried. Schevitz also advises Zuckerman to take advantage of his newfound wealth. However, Zuckerman does not wish to use his wealth to put distance between himself and the world. He also does not want to call the police because he does not want to compromise his mother’s privacy.

The next morning, Zuckerman exits his apartment building and is approached once again by Alvin Pepler. Pepler amuses Zuckerman with a show of his trivia knowledge, and Zuckerman finds Pepler quite entertaining. However, Pepler then asks Zuckerman to give his feedback on a review that Pepler is writing about “Carnovsky.” Reluctantly, Zuckerman reads what Pepler has written and gives his honest opinion. Zuckerman does not think the review is very good, and Pepler responds hostilely. Zuckerman becomes scared, and he remembers his faint suspicion that Pepler might be the threatening anonymous caller. Zuckerman runs away in panic. Zuckerman then goes to the apartment where his ex-wife Laura lives. Laura is not home, but her neighbor Rosemary is. Rosemary tells Zuckerman to stop trying to rekindle his relationship with Laura, as it is very painful for Laura. Rosemary then accuses Zuckerman of basing one of the characters in “Carnovsky” on Laura. Zuckerman, in disbelief that Rosemary could believe such a thing, denies the assertion.

Soon after, Zuckerman receives a call that his father has had a heart attack and will likely die soon. Zuckerman flies to Miami, where his parents live, and visits his semi-conscious father in the hospital. Zuckerman, struggling to connect with his father, talks about the beginning and ending of the universe. His father’s last word sounds to Zuckerman like “bastard.” After his father’s death and funeral, Zuckerman takes a plane with his brother from Miami to Newark. Zuckerman’s brother, Henry, accuses Zuckerman of being responsible for their father’s death. He says that their father believed the characters in the rather shocking “Carnovsky” to be based on Zuckerman and his friends and family, and the shock of this was too much for their father to take. Zuckerman then wanders around the neighborhood in Newark where he grew up, and he feels completely alienated from it.

More summaries and resources for teaching or studying Zuckerman Unbound.