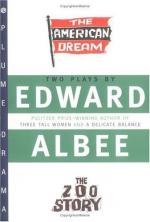 Books Like The Zoo Story by Edward Albee | Suggested Reading

Edward Albee
This Study Guide consists of approximately 44 pages of chapter summaries, quotes, character analysis, themes, and more - everything you need to sharpen your knowledge of The Zoo Story.

It is essential that anyone wanting to understand Edward Albee read his 1962 play Who's Afraid of Virginia Woolf?

Whether as relevant to Albee or not, everyone interested in modern drama should read Martin Esslin's 1961 text The Theatre of the Absurd.

Those interested in Albee as an adapter of other people's work (and what might draw him to that work) would enjoy The Ballad of the Sad Cafe, which he adapted from Carson McCullers's novel and Malcolm, adapted from the work by James Purdy.

After years of obscurity and what some took to be decline, Albee suddenly returned to prominence (and major awards) with the play Three Tall Women, produced on Broadway in 1994.

What was it about America in the 1960's that made Albee call it "this slipping land of ours" ? Two places to look for answers are in books and...

The Zoo Story from Gale. ©2005-2006 Thomson Gale, a part of the Thomson Corporation. All rights reserved.