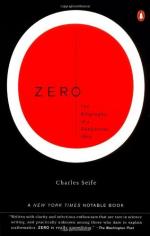 Zero: The Biography of a Dangerous Idea Summary & Study Guide

Charles Seife
This Study Guide consists of approximately 25 pages of chapter summaries, quotes, character analysis, themes, and more - everything you need to sharpen your knowledge of Zero.

Zero: The Biography of a Dangerous Idea Summary & Study Guide includes comprehensive information and analysis to help you understand the book. This study guide contains the following sections:

This detailed literature summary also contains Topics for Discussion and a Free Quiz on Zero: The Biography of a Dangerous Idea by Charles Seife.

Zero: The Biography of a Dangerous Idea was written by Charles Seife, an American journalist and journalism professor at NYU. Seife's biography, of course, is of a number and hence it is not a standard biographical work. Instead, the book tries to explain math and physics to the interested lay person. The use of zero is largely a plot device to organize the information Seife wants to communicate. Thus all the stories of mathematical and scientific advances are built around the relationship of the breakthrough to the number zero and its compliment, which is infinity.

The first five chapters of the book tell the early history of zero. Zero was not always a number. At first, it served as a mere place-holder for other numbers invented by the Babylonians. Seife brings out the superiority of the Babylonian numerical system and how it led to zero, which is covered in the first chapter. In Chapter two, Seife explains how the Greeks, despite their great level of science and culture, missed zero which Seife explains through the philosophies of Pythagoras and Aristotle. Seife also reviews the nature of the calendar.

The third, fourth and fifth chapters explain how zero emigrated by Eastern religion and science into the west and the theological and scientific problems it was able to resolve. Chapter three explains the Indian use of a base-ten number system and Fibonacci's use of their numerology. Chapter four discusses the connection between zero and infinity, which continues throughout the book. Chapter five discusses the beginning of calculus in the work of Leibniz and Newton and how meditation on the role of zero led to calculus.

Seife argues that Hindu philosophy was friendlier to the idea of the void and that Aristotle's view, which had been adopted by the Catholic Church, was more hostile. When the authority of the Catholic Church broke down, the Renaissance was able to bring zero into the West and open up scientific progress. It also helped in the theologies of Descartes and Pascal, not to mention their mathematics.

Chapter seven explains how zero and infinity affected chemistry and physics, and introduces the idea of absolute zero and thermodynamics and the formation of quantum mechanics. The chapter also discusses black holes and general relativity. In Chapter eight, Seife uses the ideas of infinity and zero to address the contemporary challenges of string theory and the ultimate fate of the universe. The final chapter, fittingly entitled Chapter infinity, briefly finishes up the book, showing how advances in physics and math have proceeds by finding zero and eliminating it. As Seife points out, zero may always remain elusive and ineliminable. In fact, zero may stand at the end of time, waiting to be the victor in a universe that it can show will one day die a cold death.

More summaries and resources for teaching or studying Zero: The Biography of a Dangerous Idea.

Zero: The Biography of a Dangerous Idea from BookRags. (c)2022 BookRags, Inc. All rights reserved.