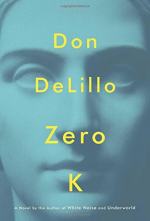 Don Delillo
This Study Guide consists of approximately 40 pages of chapter summaries, quotes, character analysis, themes, and more - everything you need to sharpen your knowledge of Zero K.

The science fiction novel Zero K by Don DeLillo (1st hardcover edition) opens with a young man named Jeffrey Lockhart travelling many miles to an isolated facility in order to say farewell to his father’s second wife, Artis. Here, Jeffrey learns that the purpose of the facility, called the Convergence, is to freeze terminally ill people, using a process called Zero K, so they can be thawed in the future when, presumably, their conditions will be cured. While Artis is being prepared for her deep freeze, Jeffrey learns that a hospice is located in the facility and that a monk speaks to them about their deaths. He also finds a wall-mounted monitor that shows him images of natural disasters and other destructive things. His father, Ross Lockhart (which Jeffrey tells us is not his real name) tells Jeffrey that he has full confidence in the process. Jeffrey does not. During this initial visit to the Convergence, we learn that Ross has been investing large amounts of money in the project.

Later, Jeffrey is guided to a room with a view slot. He witnesses a meeting of people (including his father, Ross). This meeting discusses the dystopic future that the administrators predict and how the Convergence can help save humanity and mend the wounds of the apocalypse. At this point, Jeffrey still has issues with the project and his father.

Jeffrey’s family history is shared with readers. His father left when he was 13, and his mother eventually died. It is also implied that his mother, Madeline, had some sort of mental illness, which Jeffrey also seems to have. This causes Jeffrey to have long lasting disdain for his father; the disdain is so powerful that it still exists at the end of the novel.

Later, Ross tells his son that he is to be frozen using Zero K in order to be with Artis in the future. Jeffrey is shocked and argues with Ross. Then, Jeffrey meets Ben-Ezra in the facility’s garden, who advises Jeffrey to get Ross to change his mind. Ross changes his mind without Jeffrey’s help. After this, Jeffrey is shown to an area called the veer, where he sees three pods with individuals inside of them. He learns that these people are referred to as the heralds, as they have no life-threatening condition, but are heralding in the new world. Artis is frozen, and the narrative briefly shifts to her perspective. She can still think while she is in the pod.

Part II of the novel opens with Jeffrey being interviewed for a job by Ross’ boss. He gets the job but rejects it out of principle. We meet Jeffrey’s girlfriend and her adopted son Stak, who was adopted by her ex-husband in the Ukraine. We learn that Stak focuses on numbers and bets on terrorist attacks. Soon after, Jeffrey meets with Ross, and Ross explains that he will be frozen after all. Jeffrey agrees to travel with him to the Convergence facility. Before they leave Jeffrey is interviewed for a job as an ethics specialist at a college. Jeffrey travels to the Convergence facility and learns that some of the artwork around the facility actually consists of human corpses and witnesses the large number of frozen individuals in pods. Ross is frozen and Jeffrey returns home. He then accepts the offer for the job as an ethics specialist and witnesses the sun aligning with the city street layout.

More summaries and resources for teaching or studying Zero K.