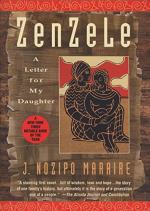 Zenzele: A Letter For My Daughter Summary & Study Guide

Zenzele: A Letter For My Daughter Summary & Study Guide Description

Zenzele: A Letter For My Daughter Summary & Study Guide includes comprehensive information and analysis to help you understand the book. This study guide contains the following sections:

This detailed literature summary also contains Quotes and a Free Quiz on Zenzele: A Letter For My Daughter by J. Nozipo Maraire.

The following version of this book was used to create this study guide: Maraire, J. Nozipo. Zenzele: A Letter to My Daughter. Delta, 1997.

This book is written in the form of a letter from a mother to her daughter shortly before teh daughter's departure for an American university. Over the course of the letter, the mother, named Shiri, uses anecdotes from her own life to inform her daughter Zenzele about Zimbabwe’s struggle for independence, its rituals and customs.

In the first chapter, the letter-writer is yet unnamed. Her daughter, Zenzele, has started carrying around a bright red college prospectus. Shiri marvels at her spirited, vivacious daughter and reflects on the differences between their upbringings. While Shiri spent her childhood worrying about money, today Zenzele marches in protests and adopts international causes. In Chapter 2, the mother writes of her and Zenzele's clash over the family’s plans to vacation in rural Chakowa, where there is no running water and no electricity. Zenzele wanted to go to the more developed Victoria Falls area, but her mother taught her to see Chakowa’s value as her ancestral home. In Chapter 3, the mother writes of her and Zenzele's clash over the tribal practice of “lobola,” or “bride price” as it is translated in English. While Zenzele initially rejected the practice for the way it treats women as property, her mother convinced her to see some of its ritualistic significance. When Zenzele asked her mother what it means to be an African woman, Zenzele’s mother, Shiri, reflected on her mother and her mother-in-law. Both women sacrificed their time and their bodies in order to raise their children.

In Chapter 4, Zenzele’s question about why her mother never studied in Paris or London triggers a story about one of Shiri's childhood friends, Mukoma Byron Makoni, who went to study medicine at Oxford University. He became ashamed of African history and culture and returned to their village only once. Chapter 5 focuses on racism and prejudice within academia. Zenzele's father reflected on his time as a student at an American university, where he met a white anthropologist who was racist despite the time she had spent in Africa. In Chapter 6, Shiri prepares her daughter for the everyday racist comments she will receive while living abroad. She remembers when a Polish woman tried to recruit her as a housekeeper while she was reading at a café in Warsaw. Shiri also remembers meeting an Italian socialite in Geneva who was surprised that Shiri had visited Rome and watched operas.

Chapter 7 focuses on the story of the so-called “Sister Africa,” the daughter of a Nigerian father and African American mother. When she left the United States and arrived in Africa, she learned dozens of African languages and fought for various national liberation movements. In Chapter 8, Shiri passed on the advice that she received from her parents about love. She tells her daughter about her first love, a rebellious local villager and aspiring artist. Though he excited her, the relationship did not last. She then tells her daughter the story of how she met her husband. Like Chapter 7, Chapter 9 focuses on another character’s story, that of Shiri’s cousin, Tinawo. During the independence struggle, Tinawo ran away from home and joined the freedom fighters. She became an undercover agent working as a maid in the home of a high-ranking commander for the Rhodesian army. Although she was nearly caught stealing battle plans, the commander was unable to believe that an African could be so intelligent as to work undercover.

In Chapter 10, Shiri describes her theory of the “third eye,” which a few courageous individuals have and others, like her cousin Rudo, lack. In Chapter 11, Shiri recalls a time when she and her daughter encountered paintings of black angels on the walls of a local chapel. Shiri was astounded to see religious figures portrayed with her own skin tone. For the first time, Shiri mentions that she is sick. Chapter 12 opens with Shiri sipping tea and finishing her letter at her parents’ house in Chakowa. Early in the morning, she had paid a visit to their graves. She reflects on the meaning of death, and says that she has no regrets about her life. She has loved, which she decides is a form of courage in itself. Shiri tells her daughter to go well and be strong before concluding and singing the letter.