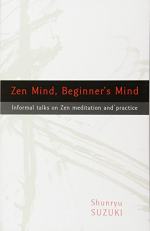 The following version of this book was used to create the guide: Suzuki, Shunryu. Zen Mind, Beginner’s Mind: Informal Talks on Zen Meditation and Practice. Edited by Trudy Dixon, with a preface by Huston Smith, an introduction by Richard Baker, and an afterword by David Chadwick, 40th anniversary edition. Shambala, 2011. Paperback.

Zen Mind, Beginner’s Mind starts with a preface by Huston Smith, an introduction by Richard Baker and a prologue by Shunryu Suzuki. The body of the book is divided into three parts. Part 1, called Right Practice, has nine chapters. Part 2, called Right Attitude, has 14 chapters and Part 3, called Right Understanding, has 13 chapters. The book concludes with an epilogue by Suzuki and an afterword by David Chadwick. The main sections of the book are a series of talks given by Suzuki over a period of several years in the mid-1960s to the Los Altos Zen group, which was affiliated with Suzuki’s main group, the San Francisco Zen Center.

Because the book is a series of talks, it reads differently than most books. Each chapter, which is a specific talk, is a stand-alone entity. Although there are thematic elements that run through the book, there is no single narrative. For the most part, Suzuki’s language is clear, immediate and easy to understand. His thinking is circular in nature and the themes he discusses are difficult to comprehend. At times, a reader may have trouble following his line of thinking. The point of view ranges between third person, second person, first person singular and first person plural. The majority of the text is in present tense.

The book opens with a preface written by Huston Smith. Although not in the original publication of Zen Mind, Beginner’s Mind in 1970, it was included in the paperback edition first published in 1973. In the preface, Smith compares Shunryu Suzuki to Daisetsu Suzuki (also called Daisetz in the preface), another important Zen teacher who brought Zen to the West 50 years before S Suzuki. Smith describes Daisetsu Suzuki’s approach to Zen as dramatic and exciting while Shunryu Suzuki’s approach is through the ordinary daily life.

In the introduction, Baker underscores the importance of beginner’s mind, equating it with Zen mind. Baker relays how the book came to fruition from talks giving to the Los Altos sitting group. He highlights the Suzuki’s biography and concludes with a quote from Dixon that emphasizes Suzuki’s ordinariness.

In the prologue, Suzuki describes beginner’s mind as a prerequisite to practice Zen meditation. He says that no thought of achievement is necessary to practice Zen; then the practitioner has contact with boundless, original mind.

In the first section of talks, entitled Right Practice, many of the chapters start with a focus on the physical body. He describes how to sit in the first chapter. In the next, he discusses breath. In another chapter he outlines the practice of bowing. He describes thoughts as waves that come while practice. If thoughts are left alone, he explains that they will quiet down. Other disturbances during practice can feel like weeds, but he describes it is best to use them as fertilizers for one’s practice. In this section, Suzuki’s impish character comes through. In one chapter he says the best way to control someone is to encourage the person to be mischievous. In another talk, he gives another analogy that sometimes the worst horse is the best horse. He talks about dualism and small mind and big mind as well as many other themes that repeat through his talks. The section ends with Suzuki emphasizing that practice is nothing special.

The second section is entitled Right Attitude. It focuses on the perspective and approach that is important for the practitioner. Suzuki discusses applying right effort that is not too excited or enthusiastic. He discusses taking a scientific approach to practice: noticing how things are in each moment both in practice and in daily life. He talks about doing an activity completely with full concentration and not applying any thoughts to the activity. He suggests limiting one’s activity so one’s life is simpler. He defines every activity or creation as coming from God, or universal mind, and highlights the importance of not claiming a creation as one’s own. Other areas he touches on in this section include studying oneself, not taking practice too seriously, the importance of constancy, communicating directly and clearly, and seeing opposites as part of a whole. This section ends with a talk about seeing a waterfall at Yosemite and how we are like the individual droplets that return to the whole after we die.

The third section, entitled Right Understanding, is focused on the mind of the practitioner. He discusses the truth of transiency, that everything changes. He uses this truth to introduce the illusion of a permanent self. He talks about the theme of emptiness, that nothing is substantial but it is real. Believing in nothing is understanding the truth of emptiness. He points out that naturalness is not about giving up rules or structure in the physical world, but being able to be unique and direct in one’s expression. He discusses the importance of having calmness in activity. He broaches religious tolerance by saying it is important to accept all school of Buddhism as expressions of Buddha’s truth. He explains how Buddhist practice is grounded in unconsciousness and the importance of this. And in the last talk of this section, he underscores the importance of not losing one’s way, of being the master of one’s surroundings. He says that without any ideas of attainment, then you are always Buddha.

In the epilogue, Suzuki again emphasizes the importance of practice, that this is the path to take rather than focusing on enlightenment. He reiterates the importance of beginner’s mind and describes how he thinks Americans are particularly suited toward the frame of mind. He shares his hopes that Americans will find their own way of Zen practice.

The afterword by Chadwick focuses on the impact of Zen Mind, Beginner’s Mind after 40 years in print. Suzuki’s students did not give the book much importance because Suzuki himself treated it lightly. However the impact outside the Zen community was significant. Chadwick quotes numerous people who found the book meaningful, and writes about several who have included the book in their works of art or in their own books. He quotes a Zen teacher who believes Suzuki was instrumental in establishing Zen in America. Chadwick finishes with the history of Buddhism in America and the story of how the book came to be published.