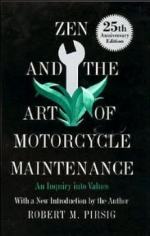 Zen and the Art of Motorcycle Maintenance Summary & Study Guide

Robert M. Pirsig
This Study Guide consists of approximately 43 pages of chapter summaries, quotes, character analysis, themes, and more - everything you need to sharpen your knowledge of Zen and the Art of Motorcycle Maintenance.

Zen and the Art of Motorcycle Maintenance Summary & Study Guide includes comprehensive information and analysis to help you understand the book. This study guide contains the following sections:

This detailed literature summary also contains Topics for Discussion and a Free Quiz on Zen and the Art of Motorcycle Maintenance by Robert M. Pirsig.

The novel, published in 1974, uses a long motorcycle trip to frame a prolonged exploration of the world of ideas, about life and how best to live it. It references perspectives from Western and Eastern Civilizations as it explores the central question of the how to pursue technology so that human life is enriched rather than degraded. Narrated in the first person, it incorporates a parallel presentation of trip details and an ongoing retrospective concerning dramatic events from the Narrator's past, creating rich symbolism and including numerous analogies reinforcing the overall theme of coming to terms with the mysteries of why we exist and how best to live.

The physical journey starts from Minneapolis, Minnesota and concludes near San Francisco, CA. Initially, the Narrator and his son, Chris, ride on one cycle, and a couple, the Sutherlands, ride on another. The Narrator represents someone who is relatively comfortable with technology, and the Sutherlands represent people who feel oppressed by it, but who, at the same time, are dependent on it; conflicted. They travel together northwest to Bozeman, Montana; an important location related to the Narrator's college teaching career and dramatic past. At that point, the Sutherlands return home, and the narrator and his son continue on alone after undertaking a hiking expedition in the mountains outside Bozeman. The hiking expedition includes significant explorations of the inner world of spiritual development and of the Narrator's difficult relationship with his son.

During all this traveling, the Narrator weaves together observations about life, the story of the struggles of a shadowy character called Phaedrus, and the day-to-day details of the trip. There is something of a mystery surrounding Phaedrus' connection to the Narrator. As the book unfolds, this mystery is resolved, and readers learn that Phaedrus is the name he gives to himself to represent his life before he had a nervous breakdown and underwent a radical psychiatric procedure called Annihilation ECS. The story of Phaedrus is a story within the overall story. The Narrator's difficult relationship with his son is another situation driving the book. Finally, a summiting search for spiritual meaning in a technological age provides a channel uniting all these distinct currents.

The book resolves the various tensions introduced and exhaustively explored in its 406 pages divided into 32 chapters and organized into four parts corresponding to watershed moments in the ongoing interplay. At book's end, the Narrator embraces his past and assumes an integrated personality capable of facing life and his role as a father with optimism. On the philosophical level, the book concludes with a clear vision of how to spiritualize and integrate a scientific outlook with a more humanistic or Romantic outlook in the service of right living.

More summaries and resources for teaching or studying Zen and the Art of Motorcycle Maintenance.

Zen and the Art of Motorcycle Maintenance from BookRags. (c)2022 BookRags, Inc. All rights reserved.