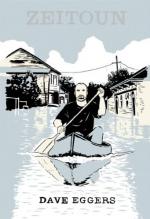 Dave Eggers
This Study Guide consists of approximately 33 pages of chapter summaries, quotes, character analysis, themes, and more - everything you need to sharpen your knowledge of Zeitoun.

This detailed literature summary also contains Topics for Discussion and a Free Quiz on Zeitoun by Dave Eggers.

"Zeitoun," tells the story of Abdulrahman Zeitoun, a Syrian-American, who lived with his wife and children in New Orleans in 2005 when the city was hit by Katrina, the Category 5 hurricane that literally destroyed the city and changed it forever. Although he was thousands of miles away from his Syrian homeland, Zeitoun maintained a close relationship with his large family there, especially his older brother Ahmad. He often thought back to the time they spent together fishing as young men and then later as sailors together on the high seas.

Zeitoun eventually settled in the United States and made his way to New Orleans. Zeitoun was a family man and had a great desire to begin his own family. He met Kathy, an American woman who was a single mother and had converted to Islam after going through a bitter divorce. Zeitoun knew that Kathy was the right woman for him the second he set eyes on her. Kathy was not as quickly taken with Zeitoun, but slow and steady wins the raise and eventually she fell in love with Zeitoun after realizing he was everything she could want in a man. They married, had three daughters, and owned and operated a successful painting contractor business. They also owned multiple properties in New Orleans and ran a property management business.

When the news reports were ominous about the approaching hurricane, Kathy wanted to evacuate. Zeitoun, however, was determined to stay. The news always exaggerated about the severity of storms so he wasn't worried. Kathy stayed on for a while but as conditions worsened, she felt the need to get her children to safer ground. She hated leaving Zeitoun behind, but he was immovable. As everyone knows by know, the storm was worse than the news reports. Zeitoun did his best to keep his properties patched up and the leaks plugged. He had a aluminum canoe that he paddled around in to help others in need. He even fed the neighbor's dogs that were left behind. He brought people to safety and sent help for those he with his small canoe couldn't help.

But good intentions aren't always appreciated. One day while working at one of his properties, the door was knocked down by what turned out to be hired FEMA "soldiers." The armed soldiers arrested him and the companions he was with. No one would tell him what he was accused of doing. He was denied his basic right to make a phone call. Kathy and Zeitoun's brother Ahmad were frantic when they could no longer contact him by phone. During his unjust incarceration, Zeitoun was denied sufficient food and medical care and was never allowed to call Kathy. The authorities suspected that he might be involved in terrorist activities because he was an Arab-American.

A kind missionary who was visiting prison called Kathy to let her know that Zeitoun was alive, but in prison. Eventually, Homeland Security officials determined that Zeitoun had done nothing wrong and the charges against him were dropped. He was reunited with Kathy and his family some twenty pounds lighter and in ill-heath after over a month of being illegally incarcerated.

Despite his ordeal, Zeitoun did not lose faith in the American dream. And although his properties were damaged and New Orleans was changed forever, Zeitoun didn't even entertain the thought of living anywhere else. He was ever grateful for the opportunities that America had given him and for his wife, children, and the family that he loved.

More summaries and resources for teaching or studying Zeitoun.