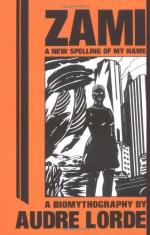 Zami, a New Spelling of My Name Summary & Study Guide

Audre Lorde
This Study Guide consists of approximately 23 pages of chapter summaries, quotes, character analysis, themes, and more - everything you need to sharpen your knowledge of Zami, a New Spelling of My Name.

Zami, a New Spelling of My Name Summary & Study Guide includes comprehensive information and analysis to help you understand the book. This study guide contains the following sections:

This detailed literature summary also contains Topics for Discussion and a Free Quiz on Zami, a New Spelling of My Name by Audre Lorde.

Zami: A New Spelling of My Name tells the story of Audre Lorde's passage from childhood to young adulthood. It covers many themes but focuses primarily on the close bounds she develops with women throughout her life, first with her mother and then with various lovers throughout the book. Audre grows up as a black woman and a lesbian, and in American society in the 40s, 50s, and 60s, this was a triple-threat. Her race, gender and sexuality were all rejected by her society at large; thus, much of the book functions with Audre living in a society that either ignores or rejects her and her telling tales of secret lesbian love.

The story begins with Lorde's childhood in Harlem. She is a child of black parents from the West Indies. She grows up in Catholic School but faces racism as a child, along with the handicap of being legally blind. Yet she displays strong verbal talents, particularly for writing, from an early age. As she grows up, she continues to find herself alienated. She has a young friend named Gennie who commits suicide and who was Audre's first love. In High School she joins a group of outcasts who call themselves "The Branded" and begins to write poetry. And after high school she leaves home, dates a boy named Peter who impregnates her. She has an abortion. She is very unhappy in college and moves to Connecticut to find work. There she meets her next love, Ginger. She returns to New York after her father's death. She begins a relationship with a woman named Bea, who she then leaves for reasons she does not understand. Audre moves to Mexico after saving some money. In Mexico she meets a middle-aged woman named Eudora who is a mentor and lover to Audre. She then returns to NYC and falls in love with a schizophrenic woman named Muriel, and they move in together. Audre's life begins to look up but Muriel cheats on Audre and their relationship is destroyed. After recovering she meets her final lover in the book, Afrekete, who ultimately leaves her for a "gig" in Atlanta. Audre then ends the book by meditating on all the things the women in her life, particularly her mother have taught her and speculates that her mother shared her own deep passion for the feminine soul.

More summaries and resources for teaching or studying Zami, a New Spelling of My Name.

Zami, a New Spelling of My Name from BookRags. (c)2022 BookRags, Inc. All rights reserved.