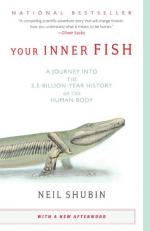 Neil Shubin
This Study Guide consists of approximately 36 pages of chapter summaries, quotes, character analysis, themes, and more - everything you need to sharpen your knowledge of Your Inner Fish.

This detailed literature summary also contains Topics for Discussion on Your Inner Fish by Neil Shubin.

“Your Inner Fish” by Neil Shubin is the author’s personal story about his many expeditions and years of study and research, of fossils that he dug up literally all over the world. From the Arctic Circle, to China, to Nova Scotia, Greenland and the American West Shubin was ready to pack his gear an go anywhere where he might be able to find more answers to the question that he was determined to have answered. Shubin, along with a wide swath of paleontologists, anatomists and biologists, were convinced that there was a missing link. Although this link involved man, it wasn’t the missing link that readily comes to mind. What Shubin was dedicated on finding was fossil evidence of creatures that left the sea for land. He knew it existed. Every finding by paleontologists and biologists from past times had found hints and clues that the creature existed. But where was the evidence? That was the question that Shubin was determined to answer.

Shubin has been convinced that the Arctic Circle held the best chance for discovery of this creature. He learned that the rocks were much older than many of the sites he’d been to. He had always found fossils and added to the growing evidence of the existence of the transformative species but he wanted the actual creature – the fossil evidence of this animal.

Shubin and his team headed to the Arctic Circle and found a plethora of fossils but not THE fossil. He was dismayed at not finding the fossil that he longed to find. He was literally packing up when a grad student who was part of the expedition found a mother lode of fossils. Shubin and his team tore into the area and sure enough—he found the link. Just as Shubin and many others predicted, the creature had elements of both fish and amphibian. They also learned from rock progression that the period that this creature lives was about 375 million years ago. Since Shubin and his colleagues discovered the creature, they were allowed to name it. They asked the Intuit tribe in the region for an appropriate name. The Intuits suggested “Tiktaalik,” which meant large fresh water fish. It was a sensation in the world of paleontology and even made the front page of some leading papers including the New York Times.

Despite achieving his goal with this important discovery, Shubin was far from done. He had more fossils to find and more intermediate animals to discover. In fact, his discovery led to more questions than answers and Shubin was determined to answer as many as he could. Shubin makes the connection between all species that ever lived and man. From the primitive microbe, to the jellyfish, shark, frog, polar bear and man’s best friend – man is related to all of them and Shubin has the proof.

More summaries and resources for teaching or studying Your Inner Fish.