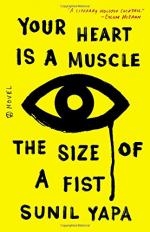 Sunil Yapa
This Study Guide consists of approximately 44 pages of chapter summaries, quotes, character analysis, themes, and more - everything you need to sharpen your knowledge of Your Heart Is a Muscle the Size of a Fist.

Your Heart Is a Muscle the Size of a Fist Summary & Study Guide includes comprehensive information and analysis to help you understand the book. This study guide contains the following sections:

This detailed literature summary also contains Quotes and a Free Quiz on Your Heart Is a Muscle the Size of a Fist by Sunil Yapa .

Victor, a young homeless man, is lighting a joint camped out in an underpass when he hears the voices of a protest in the distance. He goes to join in so that he can sell some weed and buy a plane ticket to somewhere else. He asks random people and they all reject his offer, and one girl tells him that this is not a protest but a "direct action" (location 490). John Henry surveys the crowd, a former preacher he sees the whole thing in religious terms, the chanting being like prayer and the protest being a "new American religion" (location 220). Officers Park and Ju have a woman approach them offering coffee and Park acts in a hostile manner, threatening her with a baton. Chief Bishop starts to wonder about his son, Victor, who ran away three years ago, but is soon distracted when he is ordered to clear the intersection. Victor starts to reminisce about his time spent traveling and keeps trying to sell weed until he is reported to a cop, who tries to seize his bag. A girl called King, a seasoned protester, sees this and decides to intervene in a friendly and non-confrontational way. Ju remembers being deployed during the LA riots of '92 and concludes that sometimes looking away is part of the job too.

King reminisces about her own life story, having gotten hooked on protesting at 19 and being in love with a boy, then drifting around the country attending more protests and growing more militant and angry. It all culminated in a dramatic event after which she pledged to be nonviolent from now on and she de-escalates the situation with Victor and the cop, but is told by Bishop to start clearing the intersection. John Henry remembers the lone protester who did not last long at a protest and remembers the importance of always protesting as part of a community. King invites Victor to meet the other protesters and to participate in lock-down but he is reluctant to do so. Then he remembers his father burning all his books when he was 16, prompting him to run away, which makes him change his mind and volunteer for lock-down. Victor goes into lock-down but soon grows afraid as the police start threatening to deploy tear gas and then do so. Dr. Charles Wickramsinghe is a Sri Lankan delegate traveling by plane from Sri Lanka to America to attend the WTO meeting, and he meets an actress on board and they share perspectives, realizing that they might not be so different after all.

The Mayor issues an order to Bishop to start clearing the intersection in any way necessary, and Bishop recalls the shock of discovering his son was living homeless in an underpass. Park starts warning Ju about the possibility of cop casualties and Park remembers his upbringing by a racist father, then pepper-sprays two men who are filming the events from a car who refuse to stop filming. Ju reprimands Park for using pepper-spray and he maintains he was right to do so, but she still calls it in. Victor recalls playing a game with his mother in which they would pretend to be exotic fruit growing on a plantation far away. Victor sees the cops start to launch the tear gas canisters but is still too embarrassed to chant, and he remembers seeing a homeless American girl in Bolivia begging for change. He no longer knows what to believe in.

Charles tries to make his way to the convention center but is told that the meetings are cancelled. He is met with hostility by protesters until he tells them he is Sri Lankan, and he wonders why so many of them see third world countries as being in need of saving. Victor continues to feel more afraid and alone. King witnesses the tear gas launching and recalls her time spent living with John Henry, and hopes that reporters will record everything that is happening here. Bishop starts pepper-spraying and kicking people, but also apologizing at the same time, and wishes he could take back his orders for the cops to fire on the people.

King starts to regret allowing Victor to volunteer for lock-down and she remembers shooting a man when she was in Mexico. Park and Ju are approached by Charles who says he is a delegate and they arrest him. Charles cannot understand why the most important meetings of the decade are being shut down. Victor starts to think about the extent of personal responsibility in times of war and conflict, and concludes that not everyone can be constantly aware of their true impact on the world. He sees police applying chemical irritants to a woman and this prompts him to start chanting. Henry grows very proud of Victor but King expresses concern that she does not think they are winning anymore. Victor tries to reassure her but she gets angry at the idea of him telling her how she should be feeling. Victor tries to defend a medic from his father Bishop but he sprays Victor, all the while it is unsure whether he recognizes him as his own son. King helps an injured Henry to the Sheraton while remembering shooting the man at the border, she cannot help Victor or Henry so she decides to leave. Charles is put on a bus serving as a makeshift jail where he is met with hostility until he invites the others to share their stories. He is soon finally released and allowed into the building. Bishop remembers a conversation with his father then develops a new resolve to clear the intersection. His thoughts are interrupted by a canister landing near him and Park starts firing into the crowd. Victor recalls countries he has visited where citizens have been abducted and never seen again, but also remembers places where he found a real sense of community. He wishes his father could understand his experiences, and he sets out to find him and stage a reunion.

King becomes so overwhelmed by her memories of what she did at the Mexican border that she starts smashing a window. Park reveals that he was involved in policing the aftermath of the Oklahoma bombing, and now he is preparing to shoot Victor who is making his way towards Bishop. Bishop remembers spoiling Victor after his mother died and then Victor started to rebel. Park shoots Victor and then Bishop realizes where his true allegiances lie. King witnesses Victor being beaten severely by the police and forces herself to bear witness. She moves to help and ends up climbing onto the Peace-Keeper vehicle and ends up face-to-face with Ju. Victor starts to rediscover his will to live as he is being beaten and has another memory of his mother serving food to homeless people and he is happy. He realizes that this is probably the end for him. Ju has to make a rapid decision while fending off protesters and ends up shooting King.

Charles finally makes it into the meeting where he meets his old friends, the director of the WTO and a fellow scholarship recipient from a developing country. The director ends up laughing at Charles for thinking he had a chance of gaining entry into the WTO and tells him he must cut education funding in order to get in. The scholarship friend offers to help Charles but now Charles has started to lose hope of ever gaining entry. There is a description of the few things shown on TV regarding the protest, but does not show things like Charles being able to re-negotiate the terms of his entry, or Bishop and Ju intervening in Victor's beating, and King being taken away in an ambulance. The TV shows the president's plane Air Force One landing and a single headline, "VIOLENT PROTESTERS CLASH WITH POLICE" (location 3377). Ju has been arrested for trying to intervene and Bishop tends to his son Victor on the intersection. Victor has a sense of peace come over him, believing that everything will end up being fine and then feels the presence of his mother once again.

More summaries and resources for teaching or studying Your Heart Is a Muscle the Size of a Fist.

Your Heart Is a Muscle the Size of a Fist from BookRags. (c)2022 BookRags, Inc. All rights reserved.