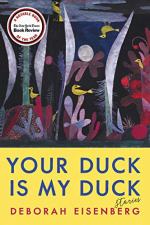 Related Topics
Your Duck Is My Duck

Your Duck Is My Duck Summary & Study Guide

Your Duck is My Duck
This Study Guide consists of approximately 41 pages of chapter summaries, quotes, character analysis, themes, and more - everything you need to sharpen your knowledge of Your Duck Is My Duck.

Your Duck Is My Duck Summary & Study Guide Description

Your Duck Is My Duck Summary & Study Guide includes comprehensive information and analysis to help you understand the book. This study guide contains the following sections:

The following version of this book was used to create the guide: Eisenberg, Deborah. Your Duck Is My Duck. HarperCollins, 2018.

In "Your Duck Is My Duck," when the narrator realizes she is suffering from a severe state of existential ennui, she rushes into the arms and illusory lives of her new acquaintances Ray and Christa. Shortly after meeting them at a party, the narrator accepts their offer to stay at their beach house, believing the trip will free her from her artistic and personal crisis. While there, another artist, Amos, reveals the exploitative history of Ray and Christa's activity in the place. In an attempt to once again avoid the truth of her surroundings, the narrator takes several sleeping pills. In the morning she discovers the drugs have made her send an inane email to her ex. For the remainder of her stay, and over the course of the narrative, the narrator works to reconcile her internal turmoil, to confront the truth of her discontent rather than hiding from it.

In "Taj Mahal," a group of acting friends reunite after a young man, Clement Rouse, publishes a memoir about their lives. Disgusted by the seeming inconsistencies in Rouse's account, the old companions attempt to reconstruct the truth of their former careers with renowned filmmaker Anton Pavlak. Emma, the daughter of their deceased friend Zoe Sills, is also in attendance. As she listens to the actors competing stories and unproductive arguments, Emma begins reminiscing about her mother. Her memories reveal how little she knew of the woman herself. The author interweaves her recollections, the older actors' dialogues, and passages from Rouse's memoir to enact the forever fragmenting nature of memory and truth.

In "Cross Off and Move On," when the narrator reads her cousin Morrie's obituary in the newspaper she is plunged into memories of her childhood. Supposedly grieving the loss of her cousin, the narrator's fixation on recollections of her mother, proves that her distress lies elsewhere. After her aunts reveal that she is in fact an Irish Jew, and not a British Catholic as her mother led her to believe, the narrator loses all sense of herself. She grows bitter towards her mother for hiding the truth of her heritage and past. Despite the time that has elapsed since her childhood, the narrator remains unable to forgive her mother.

In "Merge," Keith moves out of his father's home and searches for a job and place to live. Unused to being on his own and lacking direction, Keith quickly latches himself to his new friend Celeste. After only knowing each other for a few weeks, Celeste lets Keith stay in her apartment. Before leaving on a work trip to Europe, Celeste suggests Keith work as her neighbor Cordis's personal assistant. While Celeste is away, Keith laments his life circumstances. After some time he begins receiving cryptic postcards from Celeste. Overtime their contents become increasingly indecipherable. The narrator later reveals that Celeste traveled east on an impulse. Her linguistic work in an unnamed place leads her voice and presence to gradually disappear from the page. She does not return to the city by the end of the narrative. Keith decides to return to his old life.

In "The Third Tower," 17-year-old Therese travels to the hospital to seek further medical attention for her bizarre associative patterns of thinking. Though she cannot explain her physiological responses to words to her concerned elders, her mode of processing does not bother her. While at the hospital, the doctor performs a seemingly endless series of assessments and analyses on Therese before finally starting her on medication. The drugs gradually strip Therese of her former manner of expressing. Whenever she does have the impulse to attach images to words, she represses it. The doctor believes her self-control proves the success of his work.

In "Recalculating," Adam discovers an old family photograph which includes a man he has never met. Through his mother he discovers the man is his estranged Uncle Phillip. However, his mother refuses to reveal little else about him. Throughout his childhood, Adam holds onto an imagined version of his uncle, finding hope in Phillip's ability to escape their family confines. Years later, Adam attends Uncle Phillip's funeral. Through his uncle's friends, Adam learns the truth about the man he never knew. Even after Adam grows old himself, Adam retains his attachment to his late uncle.

More summaries and resources for teaching or studying Your Duck Is My Duck.

Your Duck Is My Duck from BookRags. (c)2022 BookRags, Inc. All rights reserved.