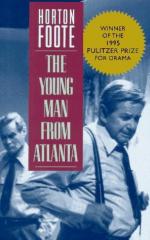 The Young Man from Atlanta Themes

Horton Foote
This Study Guide consists of approximately 54 pages of chapter summaries, quotes, character analysis, themes, and more - everything you need to sharpen your knowledge of The Young Man from Atlanta.

Dishonesty and deception are central themes in The Young Man from Atlanta. In fact, all of the relationships between the central characters seem to involve one or the other. In some cases, it is clear that someone has lied to or deceived another. In other cases, the audience viewers must decide for themselves if someone is lying or telling the truth.

Lily Dale's dishonesty with her husband, as evidenced through her later confessions, is very clear. She lies to Will about having the money that he gave her over many Christmases, and she also lies to him about her having had contact with Randy.

Will's struggle with dishonesty and deception seems to be primarily with himself. From the beginning, one gets the feeling that he is deceiving himself about his career and his professional capabilities. While he is at first boastful and confident about his abilities...

More summaries and resources for teaching or studying The Young Man from Atlanta.

The Young Man from Atlanta from Gale. ©2005-2006 Thomson Gale, a part of the Thomson Corporation. All rights reserved.