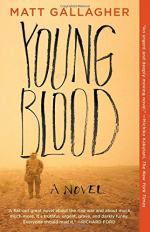 Matt Gallagher
This Study Guide consists of approximately 78 pages of chapter summaries, quotes, character analysis, themes, and more - everything you need to sharpen your knowledge of Youngblood.

This detailed literature summary also contains Quotes and a Free Quiz on Youngblood by Matt Gallagher.

The following version of this book was used to create the guide: Gallagher, Matt. Youngblood. Washington Square Press, 2016.

Youngblood is mostly set in the fictional town of Ashuriyah, Iraq, and over 50 chapters plus a prologue and epilogue follows Lieutenant Jack Porter over the course of 9 months in 2010. The novel is divided into three books, each ending with a significant event in the narrative followed by one or several documents, such as sworn statements or email exchanges.

The novel begins with the new arrival of Sergeant Chambers to the Ashuriyah outpost. Chambers quickly establishes himself as a rival to Jack, and the two come into conflict as Chambers’s reckless, haphazard ways grate against the lieutenant’s careful adherence to protocol. On their first patrol together, Chambers shoots and kills the pet goat of an Iraqi civilian, beginning a chain of events that lead to an escalation of violence.

After Chambers kills the goat, a local Iraqi source named Haitham calls Jack to inform him of Chambers’s past. Haitham claims to recognize Chambers from an earlier deployment and tells Jack that Chambers killed an unarmed Iraqi civilian, covering it up by dropping a weapon next to the body. The source also mentions someone named Shaba, who turns out to be an American soldier by the name of Elijah Rios who died on a deployment several years back.

Jack pays a visit to a local sheik named Fat Mukhtar, who shows him a photograph of Shaba and claims that the man had enormous influence among Arabs despite being American. Later on, while on another patrol, Jack’s unit hears gunfire and upon investigating finds out that an American patrol gunner has shot the occupants of a vehicle suspected of running weapons into Ashuriyah. The men turn out to be innocent, however, and Jack pays the dead men’s cousins a condolence fund.

The platoon has a roast on one of their rare days off together, and during the roast Chambers makes a speech as the new platoon sergeant that the men need to exercise vigilance and never let themselves be taken advantage of. To illustrate his point he has a camel spider and a scorpion fight. The scorpion wins, leading the platoon to adopt the nickname ‘The Scorpion Platoon’. Jack resents this, and feels his grip over his men begin to weaken, redoubling his resolve to get rid of Chambers by proving his misdeeds.

Jack meets with the outpost’s cleaning lady and prostitute Alia, who used to work for a local Sheik whom Shaba would visit regularly. She tells Jack that Rios fell in love with the Sheik’s daughter Rana, and was eventually killed under mysterious circumstances. His body was never recovered. Jack also finds three documents pertaining to the death of an Iraq civilian some years earlier, revealing that Chambers and his patrol had been investigated and found innocent of using drop weapons. While meeting again with Haitham, one of Jack’s men, Alphabet, is shot and killed, marking the conclusion of Book 1.

In the beginning of Book 2, Ashuriyah is rocked by an increase in violence, and several more American soldiers die. Jack continues to seek out information regarding Chambers’s past, and command gives his platoon the assignment to kill or capture an al-Qaeda member named Dead Tooth. Jack recognizes him as one of the cousins who collected the condolence funds earlier. As they search, a contingent of Iraqi soldiers led by a man named Saif move into the outpost alongside the Americans. Jack meets with Saif, who tells him that Rios was killed by a man named Karim, the son of the Sheik and the brother of the woman Rios fell in love with.

Jack meets with Haitham again, who confesses that he used to work for the Sheik. After Rios’s death, Haitham led Chambers to Karim’s location, and Chambers killed the Iraqi, dropping an AK-47 next to the body. As they talk a battle erupts in Ashuriyah and Jack’s platoon participates, earning them medals. At the medal ceremony at the nearby Camp Independence, Jack is told that a terrorist figurehead known as the Cleric is actually none other than Haitham himself. Jack is given instructions to kill or capture Haitham in addition to Dead Tooth. Soon after, at a funeral for a local sheik, Jack receives a call from Haitham informing him that Shaba’s remains are buried under a tree at the very location where the funeral is taking place. Jack recovers the remains, which are confirmed to be Rios’s. Shortly thereafter, Jack receives a tip as to Dead Tooth’s location and a raid is organized. A soldier fires two shots at a figure in the building, who turns out to be an unarmed Haitham. Jack and Chambers drop a weapon next to the body, and receive congratulations from their commander for killing the Cleric.

In Book 3, Jack meets Rana and uses her as a source. Jack’s platoon receives a tip as to the location of Dead Tooth, and organizes a raid. Dead Tooth is killed, but Saif and another soldier are injured along the way. Rana also tells Jack to avoid a certain stretch of road, saying al-Qaeda has planted an IED meant for him as retaliation for Dead Tooth. On an escort to Rana’s family crypt, one of her sons is bitten by a viper, and as a means of repayment for saving their lives Jack breaks protocol and takes the boy to Camp Independence, where doctors save his life. Rana also expresses her desire to leave Iraq, and Jack organizes an escape for her and her children through a local smuggler named Yousef. Jack gathers the money through his own savings and through stealing funds from the army. Yousef accepts the funds but doesn’t show up to the designated meeting spot, and Jack realizes he has been the Cleric all along. Rana and her boys are nowhere to be found, leaving Jack wondering if they are alive or dead.

Jack is commended for his service in recognizing the Cleric, and is taken out of the outpost to serve out the rest of his time at Camp Independence. Eventually he receives an honorable discharge and moves to Beirut, spending his spare time searching for Rana.

More summaries and resources for teaching or studying Youngblood.